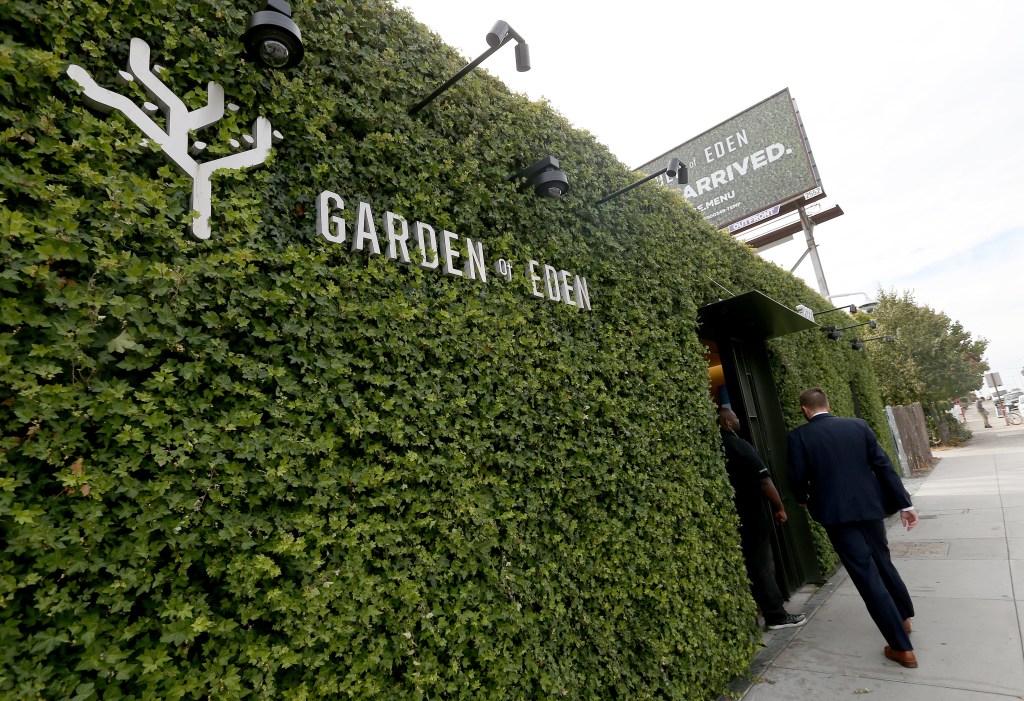 HAYWARD — Smiling greeters at a check-in desk, soft lighting and creams displayed behind glass make the Garden of Eden more like a spa than a marijuana dispensary.

Outside, greenery covers the living walls and a towering billboard proclaims, “You’ve arrived,” to drivers speeding past on busy Foothill Boulevard near Interstate 580.

“I wanted to create a world-class dispensary experience,” Shareef El-Sissi, Eden’s chief financial officer, said in a statement. “I want to be the three Michelin-star of dispensaries.”

Not only is the living wall eye-catching — the goal of its design — it hints the business is a hideaway and invites passersby to step inside.

It’s all very different from 15 years ago, when people seeking medical marijuana would see shabby carpets and folding chairs instead of the flat screens now on the walls showcasing the flower Bacio Gelato ($65 for 3.5 grams) or a package of Saturday morning mini-cookies ($20).

“It calls people here,” Nick Rose, Eden’s director of sales and marketing, said about the new look. “We wanted to create a real ‘Garden of Eden.’ ”

On Friday, the business will celebrate the transformation with speeches, a ribbon cutting, games and other activities.

Among those expected to attend are Alameda County Supervisor Nate Miley and Mayor Carol Dutra-Vernaci of Union City, where voters will decide this November whether to impose a cannabis business tax. It follows Union City’s city council signaling it would support two cannabis businesses earlier this year.

Representatives from the cities of Mountain View, Walnut Creek and Fremont also have been invited.

For years, the dispensary just north of Hayward operated very low-key. There were no signs identifying it, not even on the door.

“It’s very, very different,” Mark Grant said Wednesday as he stood inside the Garden of Eden, waiting to make a purchase. “It’s far nicer. I watched the whole process as it was happening. I watched it real close-up, because I’m a builder.”

What brings him regularly to the dispensary, Grant said, is its location. A Fremont resident, he also visited Harborside, the popular cannabis outlet on the Embarcadero in Oakland as the Garden of Eden was getting revamped.

So, too, did a woman who asked to be identified only as Flo, who lives in Hayward and has been a customer for eight years. She also used to patronize Harborside. She visits the Garden of Eden at least once a week.

“The people are what bring me back,” she said. “They’re nice. And what the business has to offer.”

The Garden of Eden can average up to 800 customers a day, Rose said.

On Wednesday, Cole Halter worked security at the metal front door as others monitored security cameras overlooking the outside of the business.

Employees routinely walk up and down the block outside, checking for suspicious activity.

“This is safer than a typical nightclub,” Halter said. “Those kind of clubs usually have one person at the door. We have four people doing security all the time.”

Just how much it cost to give the Garden of Eden a makeover was not disclosed.

“We knew that was going to change the game,” Rose said about Proposition 64, which passed with about 56 percent approval. “We wanted to change with it.”

Sand Studios of San Francisco, which designed an award-winning cannabis dispensary on Mission Street and the Golden State Warriors lounge at the Oracle Arena, oversaw the renovation of the Hayward area business.

The ribbon cutting and other activities will begin at 1 p.m. Friday and continue through 6 p.m. The Garden of Eden is located at 21227 Foothill Blvd. in unincorporated Alameda County. The free event is open to the public.